When working in the mission field, you have the opportunity to meet and minister to so many different people, but there are some who leave a tender place in your heart. Well, Eric is one of them. He is 12 years old, and has Lupus.

This disease frequently has him in and out of the hospital, leaving him very weak and in an almost helpless state. We were made aware of his condition by a loving couple who frequent the restaurant. They were very concerned with his condition, because they saw him everyday at the bus terminal, washing buses along with his brother in order to make some money for the family.

They noticed eruptions on his face and decided to have some tests done, only to discover that he had a severe type of Lupus. We immediately took Eric up to the outpost for treatment and care. Because of the poor living conditions, resources and ignorance on the part of his mother, the Lupus was advancing rapidly, deteriorating his health.

He was with us for two weeks, and during this time it was discovered that one of his kidneys was damaged. In spite of his condition, there were obvious signs of improvement in Eric’s health, and even in his countenance.

He is a quiet, gentle boy — very compliant to all of the treatments, but learning to eat fresh salads was a bit of a task. He was used to eating fast foods, sodas, chips, fried chicken, white bread, etc. In fact, several weeks after he left the outpost, the couple contacted us to see if Eric could come and at least eat breakfast and lunch at the restaurant, because they saw that he was deteriorating again. When he came to the restaurant, we noticed the puffiness in his face.

I believe that this poor boy often suffers silently. He has severe pain in his joints, and the disease has affected his 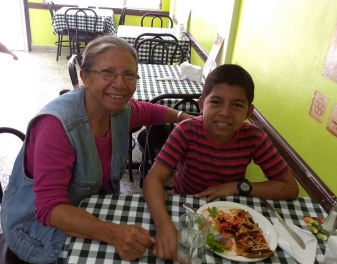 organs, but he always has a smile on his face and he does not complain. Sometimes while at the clinic, he would go quietly to the room to lie down, and I might find him with tears rolling down his face because of the pain; yet, he did not murmur or feel sorry for himself.

I pray for Eric, that the Lord may have mercy on him, and restore Eric’s health.

If you have any questions or comments, please drop them in a comment below. Thank you! 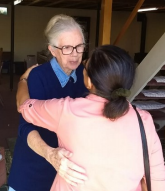