“This world is a vast lazar house, but Christ came to heal the sick, to proclaim deliverance to the captives of Satan. He was in Himself health and strength… He turned away none who came to receive His healing power. He knew that those who petitioned Him for help had brought disease upon themselves, yet He did not refuse to heal them. And when virtue from Christ entered into these poor souls they were convicted of sin, and many were healed of their spiritual disease as well as of their physical maladies. The gospel still possesses the same power, and why should we not today witness the same results?

Christ feels the woes of every sufferer. When evil spirits rend a human frame, Christ feels the curse. When fever is burning up the life current, He feels the agony. And He is just as willing to heal the sick now as when He was personally on earth. Christ’s servants are His representatives, the channels for His working. He desires through them to exercise His healing power.” 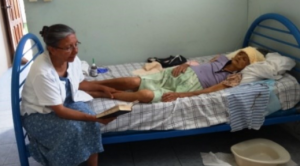 Dear M.M.M. family, I want to thank you for your prayers.

Often as I minister to those in need, I feel such a need of God’s power in my life. But, I know that in my hour of need, God is there, and many of you are praying for me and for all the work that is being done here in this part of the vineyard.

This year has been a busy one.

We’ve had patients none stop; one after the other. God’s method of healing works! We have never advertised the outpost as a sanitarium — where people could come and stay to receive treatments. However, when we see someone in need, who is willing to trust in God’s natural way of healing, we readily open our doors to them.

Well, now the doors to the clinic are opening quite regularly. Once a patient comes and God heals them, they then go out and tell others in their villages, inspiring more patients to come.

She came to the outpost as a result of a nephew who had wanted to come to the clinic for help in treating his cancer. Unfortunately, some who choose to come for cancer treatment come too late — when the cancer has totally ravaged their body.

The nephew went back to tell his aunt about our clinic. You see, she also had cancer. He told his aunt, “Maria, it’s too late for me, but you go to that clinic and find Dona Elsa, and get the treatments you need to make you well.”

Dona Maria and family came for the consultation and of course they were worried and skeptical, because the hospital in San Pedro Sula had recommended a breast removal due to two malignant tumors which had been diagnosed.

I explained to them God’s method of healing, and that we believed in a Bible principle of “eliminating evil with good”, and thus we would give the body all live foods through green juices and raw foods, hydrotherapy treatments, poultices, and some herbal teas.

Well, Dona Maria came back in two days, saying she had come to get well, because she believed that God could heal her without surgery.

She grumbled, “Those doctors just want to take a knife to you like you were an animal. After doctors operated on my nephew, the cancer mushroomed and spread all over his body. Well, I’m not going to be cut. I’m going to trust in God for healing.”

I could tell that Dona Maria was a strong woman, and when she made up 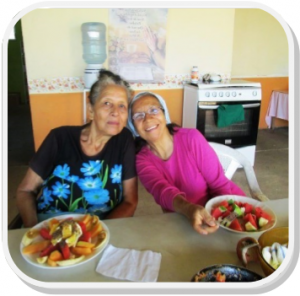 her mind about something, no one was going to change it. We all pray daily for our patients here at the outpost, but I was praying most fervently for Dona Maria; that God would heal her according to her faith.

After ten days of juicing, Dona Maria would encourage the other patients that came for treatments. She lost some excess weight, her skin began to look radiant, and yes, the tumors were shrinking! 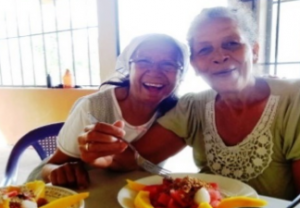 During our worships and personal talks, Dona Maria would talk about the painful deaths of her mother and husband. As I encouraged her in the Lord, she was able to understand what the Bible says about death.

Dona Maria was a real trooper with her treatments, whether it was a fever treatment, steam bath, salt glow, or clay and charcoal poultices, she was always ready and willing. She was happy when she began eating her fruit and veggie salads.

Her tumors were shrinking, but I was impressed to share with her and her 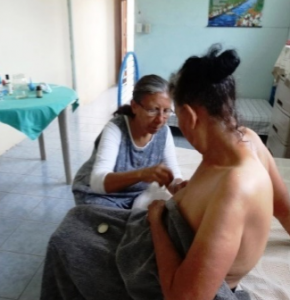 family the option of trying the “herbal surgery” with the black salve. This was going to be the first time I applied it on a patient, but I felt that Dona Maria could handle it; she had the faith and confidence in God.

I explained to them the fact that it could be very painful, and that I did not know exactly how long the process would take. Dona Maria made her decision. As she put it, “I’m going all the way so God can heal me!” 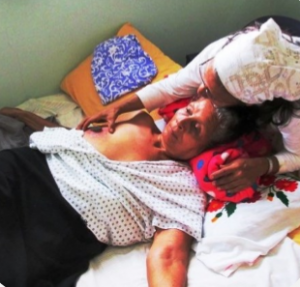 With a prayer of faith we applied a tiny dot of Black Salve over the tumor area, and after a couple of days it began to do it’s work of gathering those malignant cells. Dona Maria felt a burning sensation and a pulling. After a few more days, it opened up the surface of the skin, and it became red and inflamed.

The process took about two weeks. Thanks to God and the fact that her body had been cleansed and strengthened by the juices and raw diet, she had no problems. The pain stayed at a minimum, and the clay and ice I placed around the opening and over the breast was enough to subdue the pain.

Brothers and sisters… It was amazing what God did!!

The tumor came out, and as it was coming out, the body was, at the same time, healing itself! There was no need for cutting, no bleeding, and hardly any scaring.

It was beautiful! I give God all the glory and praise for being the Great Physician, the True Healer… Truly amazing!! God answered Dona Maria’s prayer according to her faith — to be cancer free without being cut and without the use of drugs.

To put it mildly, Dona Maria was thrilled. It had not been easy for her, but God 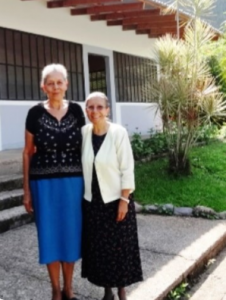 rewarded her faith. Yes, brothers and sisters we serve a Living God, a miracle working God!

Dona Maria now understands that a fully vegetarian (vegan) diet, healthy lifestyle and obedience to the laws of health are the keys to maintaining her health.

Since Dona Maria left, we’ve had three other patients that have come from her hometown of Pena Blanca. Every once in a while, Dona Maria comes to the outpost to spend the weekend with us and go to church on Sabbath. She has become part of the family.

“Let the patients be shown the necessity of practicing the principles of health reform, if they would regain their health. A great work is to be done. By the work of our sanitariums, suffering is to be relieved and health restored… Sanitariums are to be His helping hand, teaching men and women how to live in such a way as to honor and glorify God.”

If you have any questions or comments, please do leave them below. God bless you!